about us:  chorus history

As recorded by the artfully created and dutifully maintained Peninsula Singers legacy of scrapbooks:

In September 2003, Friends of the Hervey/Point Loma Branch Library sponsored a concert in the brand new community room just weeks after the library opened. Glen Fisher, Brian Verhoye and Larry Zieger performed at the concert along with several high school musicians. Larry explained to the audience that he was very concerned about the lack of choral music programs at the high school. The music budget had been cut severely in recent years.

Rehearsals were and still are held every Monday from 5:30PM to 7:30PM at the Hervey/Point Loma Branch Library locate at 3701 Voltaire Street, San Diego, California, 92107. The first practice was on February 9, 2004. Choir seasons ran and continue to run on a semester schedule, which mirrors school semesters in the community. 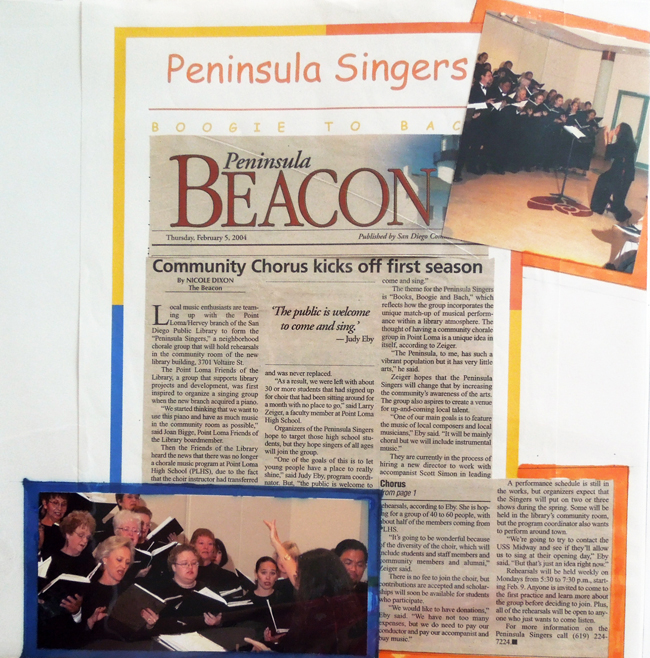 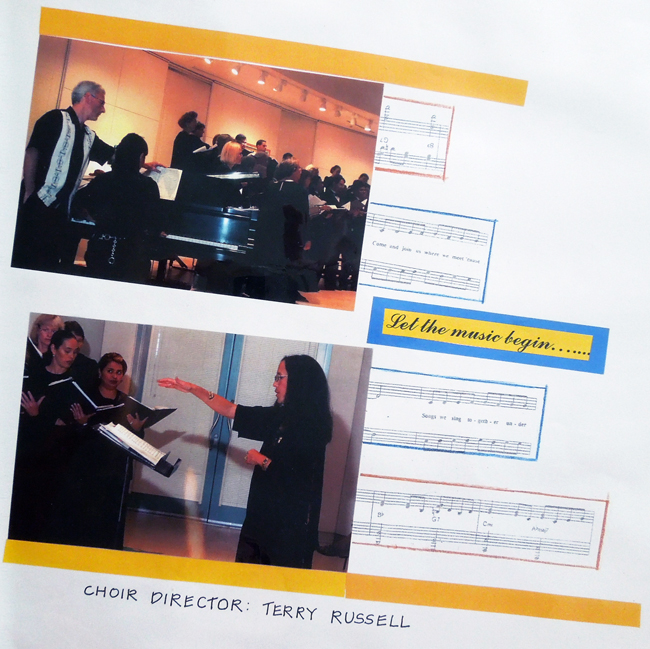 The premiere season saw a gentleman named Loren Salter as Peninsula Singers initial choir director, but after becoming ill six weeks into the inaugural season, he left and was quickly replaced by Sarah Suhonen, who ably took over the reigns and has presided ever since. Sarah brought her own brand of lively teaching, interjected with great moments of humor and laughter, which was the perfect combination and perfect fit for the Peninsula Singers. Our choir members universally adore Sarah and after 8 seasons with her, during which time they have watched her move from her 20’s to her 30s, marry and have her first child last year, it is easy to see why she commands so much respect and admiration. Sarah’s easy-going style blends with her commitment to fostering music through the community, making her a genuine leader and a much-loved artistic director for  Peninsula Singers.

Joining Sarah on our choir’s artistic team is our accompanist, Stewart Simon, who like Sarah, has been with Peninsula Singers since its inception. Stewart has been a reassuring presence for choir members for the past eight years, visible at every rehearsal and every concert to lead our group in each of its musical programs.
OUR REPERTOIRE:

Peninsula Singers have developed a vast repertoire over their first 8 years of singing together, which has included everything from George Gershwin and Irving Berlin, to Beethoven’s Mass in C and Handel’s Messiah, to notable Broadway tunes of old and new, multicultural folk music, and the music of the Beatles. Each season brings an exciting anticipation by members to discover what exciting new music awaits them. 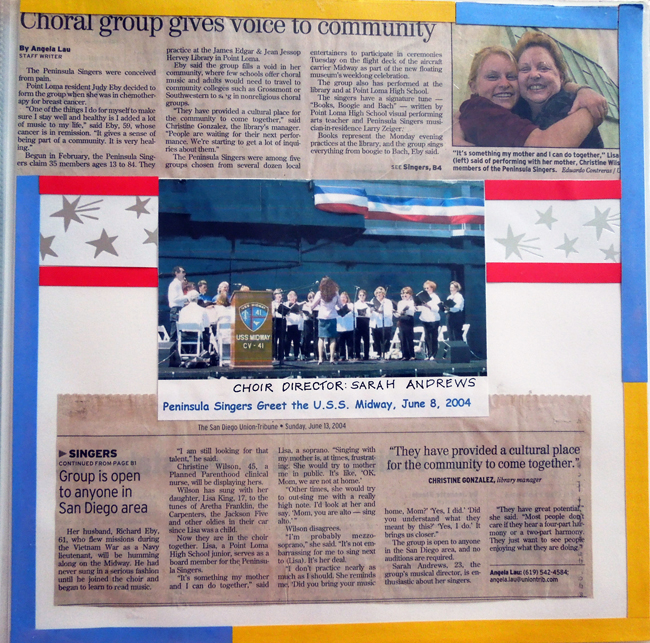 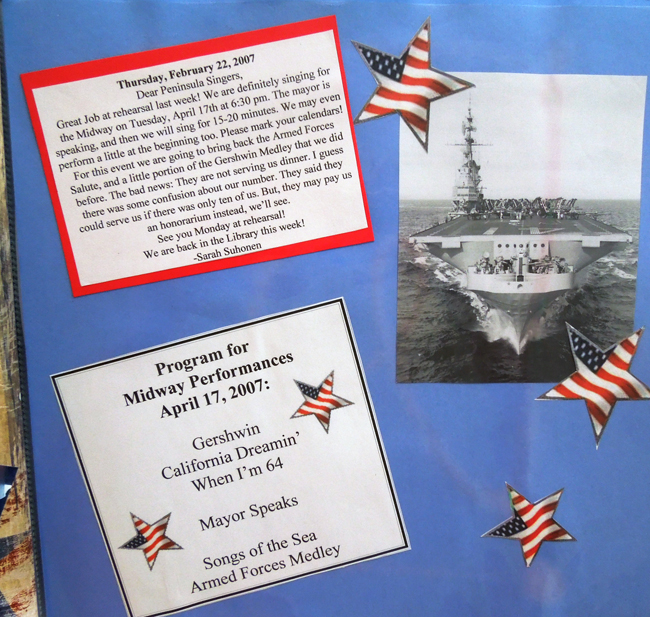 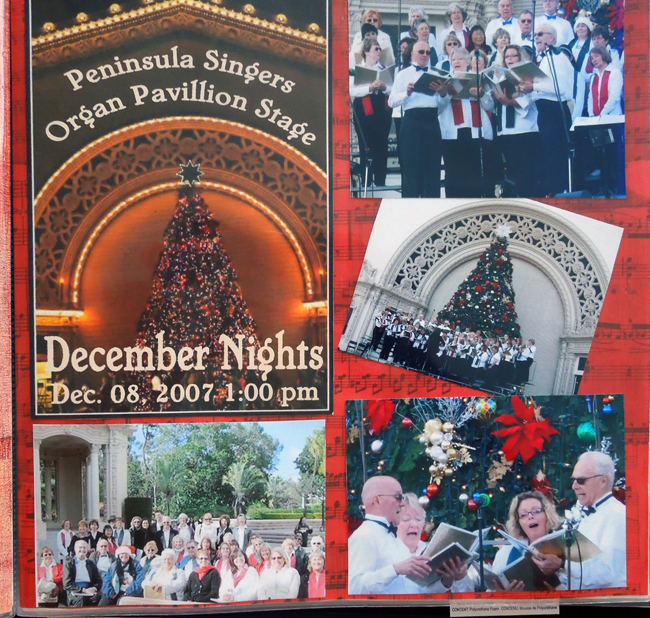 During the first season back in 2003, Peninsula Singers consisted of a 35-member chorus. Over the years, that number has grown dramatically and we today boast a 90-member strong group of fellow music enthusiasts.

Our choir is comprised of a diverse group of people, who vary in age, occupation and background. Our youngest member is 17 years old, while our oldest member is an octogenarian. In our community, senior citizens engage regularly with youthful members, all taking a cue from each other, as they learn not only their music together, but much about life and being part of a community.  In terms of experienced musical talent, our members also run the gamut. We welcome members who cannot read music at all, but are willing to learn by extra-curricular listening and practicing. They stand alongside other seasoned members, several of which have performed and still perform in professional capacities. There is definitely an element of harmony in having a thriving atmosphere where each level encourages the other and we all work synergistically toward a common goal.

We never quite know what the future may hold, but with continued determination and good fortune, we will keep flourishing as a community choir, keep entertaining and enriching lives through a common love of music, and keep a vital presence in the Point Loma community and beyond. Some of the goals we have set for the next few years include refining and growing our brand, developing our website further, engaging in concerts in familiar as well as new venues each season, and preparing for our newly slated European trip in 2014, where we anticipate performing a series of concerts in Prague, Vienna, Salzburg and Munich.

We do hope you will stay tuned!

“Little did I know that when I went through the double doors to the library’s community room for that first practice, that I was opening the door to a journey straight to Carnegie Halls a few years later!”